“Years of tumultuous living left its scars on my life,” Luca says. “But love sought me out and marked me with joy and peace.” 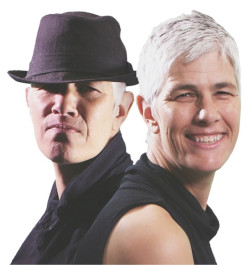 Luca Jo Groppoli will share her testimony on how she was rescued supernaturally from self-destruction in an encounter with God here at RVCC on Wednesday evening March 24, 2021 @6:30pm. Groppoli says she lived as a lesbian for many years, and had an appointment scheduled for a sex change surgery. Then things changed.

It was a normal Friday night at home watching a movie and, as she had many times before, Luca Groppoli looked down at her hand in the hand of another woman. But for the first time in her more than three decades of same-sex attractions, something was different. It just didn’t feel normal anymore.

Only weeks earlier, her partner had insisted that Luca attend church with her. Heels dug in, she went expecting judgment and rejection. Instead, she was met by a congregation that loved her right into the arms of Jesus…and that is when the questions began.
● Couldn’t she still be gay and love Jesus?
● Wouldn’t life as a straight woman mean giving up control?
● Was Jesus’ power enough to rid her of emotional pain?

Follow Luca as she shares her testimony beginning with the loss of her mother at age six, through a life of sexual and domestic abuse as both the victim and the aggressor, and on to the dark hallways of universities promoting Kinsey-inspired sexual transitioning. Hear her insights on life in the LGBT community along with bouts of depression and suicidal thoughts up to her day of reckoning and beyond.

Listen as she shares that as God’s deep love became evident, she began to see that it was less about her love for the alternative lifestyle and more about his love in the ultimate lifestyle: a life lived for Jesus. Through the gentle work of the Holy Spirit, Luca had traded a self-focused life of emptiness for a life of “peace that passes understanding.”

God didn’t make Luca go it alone, He sent helpers. And now she wants to help others with her story of healing and hope: especially those in the LGBT lifestyle who question if it is really their destiny. Her experiences will help you understand that homosexuality is as much a spiritual issue as it is a social issue.

Today, Luca is a missionary and activist with a deep love for the lost and forgotten, the homeless and the unborn. She longs to see the modern church understand its Hebrew Roots and takes “love trips” often to love on and pray with people she encounters throughout the US and Israel. As Luca sees it: “Jesus called me to minister to His heart; He’s called me to love the unlovable, the land of the misfits, the rejected and the hated ones that society quit caring about.

If you have questions about this event, please contact us at the church office.