Messiah in the Passover Seder Meal 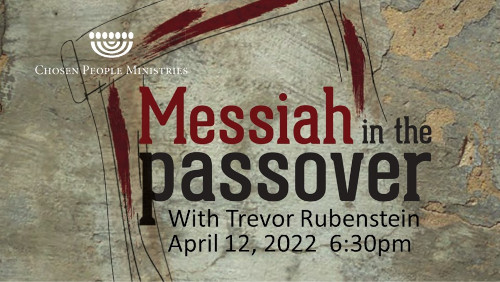 MESSIAH IN THE PASSOVER, a vivid and exciting presentation will be conducted by Trevor Rubenstein of Chosen People Ministries.

MESSIAH IN THE PASSOVER begins with the traditional Passover Seder table – complete with all the articles of this important Jewish celebration. Trevor will explain the symbolic meanings of the various items of the Passover feast and highlight their relationship to the Last Supper that Messiah celebrated with the disciples, giving special emphasis on the redemptive significance of the crucifixion.

Tickets to the evening are $5 each, and available through the church office. Seating is limited to 160 attendees.

Chosen People Ministries is over 128 years old, an evangelical mission that was founded in 1894 by Leopold Cohn, a Hungarian rabbi who came to believe that Jesus is the Messiah promised by the Hebrew Scriptures. From humble beginnings in Brooklyn, New York, Chosen People Ministries has grown into a worldwide ministry to “the Jew first and to the Gentile.” More information is online at chosenpeople.com.

Trevor Rubenstein was born in Virginia, Minnesota where he was raised in a nominal Conservative Jewish home. His family moved to Littleton, Colorado when he was a boy. He received his Bar Mitzvah at thirteen but later embraced atheism. He struggled with depression and consistent thoughts of suicide which led to drinking and drug abuse. He was eventually expelled from high school.

Later, when attending a local community college, he unknowingly entered a Bible study put together by a cult. He read the words of Jesus for the first time and became overwhelmed by the presence of the Lord. By the grace of God, He never joined the cult but soon after did give his life to Jesus (Yeshua). Immediately after his salvation, the depression was gone and he never returned to the substance abuse.

Trevor developed a broken heart for the lost and those he could relate to – the
depressed, the addict, those involved in cults, but especially the Jewish people. The Lord changed his focus, and he spent much of the next twenty years ministering to hurting people, studying the Bible, and studying the history and teachings of other religions particularly modern rabbinical Judaism. He has been blessed to be able to study under some of the greatest modern Christian apologists.

Trevor has worked and volunteered for many ministries and churches including Samaritan’s Purse, The Denver Rescue Mission, and Christian Apologetics Research Ministry. He has spent many years traveling the country, teaching at churches, and sharing the message of a saving faith in the Messiah with anyone who will listen. Trevor was also the director of the oldest evangelical outreach to the Jewish people in America. Currently, Trevor is still active in evangelism and discipleship, leading evangelism groups in Minneapolis. He is also embarking on receiving his M.Div. in Messianic Jewish Studies from The Talbot School of Theology through the Charles L. Feinberg Center.

Trevor is married to Kelssee and has two step-children.