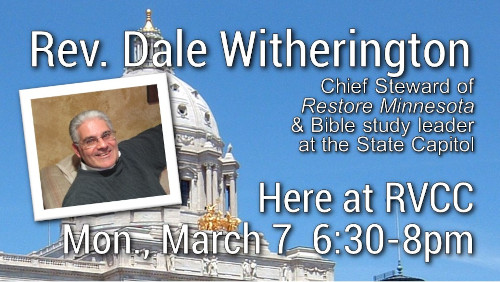 As a supplement to the Wednesday evening Biblical Citizenship class we just held, Rev. Dale Witherington will be here to speak at RVCC-Lake Elmo Monday evening, March 7 at 6:30pm.

As the Chief Steward of Restore Minnesota, Dale Witherington serves as a missionary, pastor, evangelist, disciple maker, Bible study leader and coach to elected officials, their families and staff at the State Capitol in St. Paul, MN, and as an educator to the body of Christ in understanding its role as a maker of disciples who are engaged in biblical citizenship.

In addition to his role as Chief Steward of Restore Minnesota, Dale also serves as the Co-State Director of the Minnesota Prayer Caucus, an affiliate of the Congressional Prayer Caucus Foundation, and he is the P50 Pastor serving as the liaison between Family Research Council of Washington DC and pastors of the State of Minnesota. Dale has served as a pastor, church planter, and strategic ministry consultant to churches in over 20 denominational groups.

Dale and his wife, Sue, have been married since December 1975. They have raised 3 sons and one daughter, who have blessed them with 7 awesome grandchildren. They reside near the Twin Cities metro area.

Not just for Minnesota residents, Rev. Witherington is also involved with Restore America and is excited to speak to our Wisconsin-ites too.